Less More
10 May 2021 11:35 #389905 by chairman
IT was the 1950s; her father was a handsome army officer, stationed at Camp Ayanganna, and her mother was a beautiful, curvy young woman, who toiled admirably in the sugarcane fields at Bath Settlement, West Coast Berbice.

They were a family of five, and my grandmother, Zabeda Ahamad, was their second child, and the eldest of two daughters; she was her mother’s right hand and the apple of her father’s eyes, even though his work prevented him from seeing her every day.
Eventually, the family’s lengthy periods of separation became unbearable and the respected army officer abandoned his military career and returned home, joining his wife as a labourer on the sugar plantation.
My grandparents, Nasir ‘Dennis Deen’ Ahamad and Zabeda Ahamad

They worked day and night to ensure that their family’s financial needs were met; however, this resulted in them being unable to effectively fulfill their responsibilities at home. So, at just 10 years old, my grandmother assumed her role as caretaker of the home; she cooked, cleaned, packed lunches, did the laundry, and nurtured her younger sister.
A few years would go by and her responsibilities would grow, as my great grandparents’ marriage produced four more children. As she continued to care for her family, Zabeda, or ‘Mama’ as her grandchildren called her, was limited to a primary-level education; she would eventually begin working on the plantations, manually planting fields of rice.

At 17 years old, she would become eligible for marriage, and would be paired with a charismatic, and hardworking young man, named Nasir Ahamad – my grandfather – who was commonly known as Dennis Deen. I wasn’t privileged to have known him, but my cousins called him ‘Papa’. He was the eldest of five siblings, and just like my grandmother, he too had the responsibility of being a critical support to his parents.

After marriage, my Mama moved to Novar Mahaicony, East Coast Demerara, where she settled comfortably with her in-laws. She would begin caring for her brother-in-law and three sisters-in-law as if they were her own children; the eldest was nine and the youngest was barely three years old.
When Papa’s parents died, Mama became a full-time mother to her younger in-laws, along with some of her younger siblings who wanted to stay with her, as well as the children they had begun to have of their own.
Young at heart, ‘Mama’ aims for a six!

My grandparents also cared for the children of a few relatives and close friends, who lived in riverine communities, but wanted to ensure their children had easy access to the schools located in Novar.

Together, my grandparents raised most of their younger relatives; they sent them to school and ensured they were educated; they showered them with love, kindness and care. They even ensured that the women were wedded and became part of decent families.

“They really did a lot,” my father, Nizam Ahamad, reminisced. He described Mama as being a woman who always prioritised the needs of others over herself.
“She used mek sure everybody eat first and she would say that she guh eat later; and, she would keep daddy food one side and when he come home, she would tell he that she done eat. But when we do realise, she doesn’t always eat, because it don’t always have enough food,” my father recalled.

As Mama and Papa were in their forties, my grandfather suffered a sudden death, leaving my grandmother windowed with eight children, the youngest of whom was my father. Notwithstanding the many challenges, my grandmother continued to care for her children. She also arranged for her aged mother, and youngest sister to move into a two-bedroom house built behind her house.
When most of my ‘parents’, along with my other aunts and uncles married and moved away, my grandmother began caring for the grandchildren and nieces and nephews who remained with her.

When my parents moved to Region Four for better job opportunities, I stayed behind with my grandmother to complete nursery school. Once I completed my two years of early education, I went off to Grove Primary School.

LOSSES
A few years would go by and my dearest ‘Aunty Doll’ – my grandmother’s daughter-in-law – would be diagnosed with cancer. Although aged herself, my grandmother continued to care for her in almost every way possible. My aunt eventually passed, and the family was torn. My grandmother almost immediately began playing the role of mother to my two cousins who had just lost their mother, and my uncle who was devastated having lost his wife.

A few months later, my father’s sister, ‘Aunty Bobby’, would fall ill and within hours, she would be placed on a ventilator at the Georgetown Public Hospital.
As pained as Mama was, she didn’t allow herself to lose hope. She was there to provide comfort to two other grandchildren and her son-in-law, all the while caring for her elderly mother – my Nani.

Nani was quite attached to ‘Aunty Bobby’ so no one mentioned that she was ill. One day, as Mama was hurriedly leaving home to go to the hospital, she left behind two pieces of my Nani’s clothing to “soak down.”

My Nani, annoyed by the laundry being undone, opted to do it herself. In her mid-eighties, Nani slipped on some soap water and took a hard hit on the concrete. She would also become hospitalised at the same location where her beloved grandchild, ‘Aunty Bobby’ was battling for her life.

A few days would pass and my grandmother would be stretched thin; she was caring for her grandchildren, who were still recovering from their mother’s passing; she was also providing much comfort to her two grandsons who were torn by their mother’s hospitalisation; she was also simultaneously battling to keep her head above water, tending to her hospitalised mother and daughter, both of whom eventually passed away, weeks apart.

I can’t say how my grandmother survived that period, but soon after she buried her mother and daughter, Mama began taking care of me as I pursued the National Grade Six Assessment (NGSA). I had begged my parents to allow me to move back in with my grandmother, and after many cries, they agreed. I was ecstatic. I obviously love and adore my parents, but I remained incredibly attached to my Mama.

She taught me many invaluable lessons and has supported me in ways that I may not be able to explain in this article. I remember when I was preparing to sit the NGSA in 2006, the workload was intense. I would stay up late at nights copying, and when my hands would not work as fast enough as my brain, my grandmother would sit wiping my tears, and feeding me my dinner.
She would care for me as if I was a little child, and the only time she had ever scolded me was when I refused to take cold medicine for my cough. My grandmother is nearing 80, and she has lived an impressive life, mothering and caring for dozens of her loved ones, and even complete strangers.

First her siblings, then her in-laws, who continue to regard her as their big sister, then her own children, followed by the children of the many relatives and friends, not to mention her grandchildren. While she was a young girl, she also managed to rescue a young boy from drowning.

To this day, my grandmother remains the glue that keeps generations intact. She continues to give love to those around her. As it is, she is in Canada, being taken care of by my Aunty Mureen.
On this Mother’s Day, I wish to salute all of Guyana’s mothers, especially my own mother, Nalini Singh. She is perhaps the most intense go-getter I have ever come across, and she remains very attached to her inner child.

Today, she too continues to make many sacrifices for the betterment of her family. I have also been quite blessed to have many aunts, who play critical mother roles in my life – my Aunty Chandra, Aunty Renu, Aunty Mureen, Debbie, Lureen and so many others. On this Mother’s Day, I am incredibly thankful, because quite frankly, I still need adult supervision.
Always tell someone how you feel because opportunities are lost in the blink of an eye but regret can last a lifetime.
cricketwindies.com/forum/ 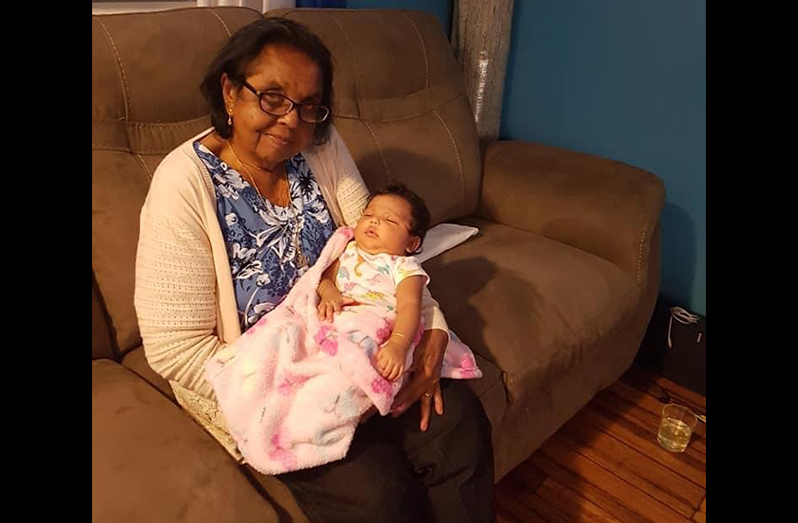