Less More
18 Mar 2021 12:03 - 18 Mar 2021 12:04 #389515 by chairman
On Sunday 28th March, the day before the commencement of the Second Test between Sri Lanka and the West Indies, there will be a Virtual Test, of equal, or even more significance. The occasion is the Cricket West Indies (CWI) AGM, which will be held virtually, as a result of the COVID-19 pandemic, and at stake will be the presidency and the immediate future path of the administration of West Indies cricket.

It has been two short years – the impact of the pandemic not withstanding — since the Ricky Skerritt administration took office, ending six turbulent years of the Dave Cameron presidency. A bitter Mr Cameron, who found himself on the wrong end of an 8-4 vote tally, was reduced to lamenting afterwards, “… so that’s where I am very disappointed that men gave me their word and then went a different way.”

The vote was held by secret ballot under the scrutiny of the international audit firm KPMG, with the six territories having two votes each. Although it has never been made public as to who switched their allegiances, it was suggested in some quarters that Mr Cameron should peer in the direction where he least expected to lose support. 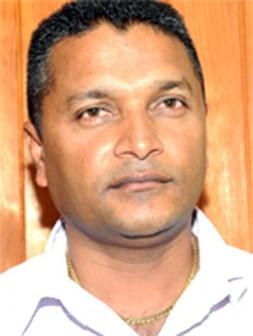 Mr Anand Sanasie, secretary of the controlling body that administers cricket in Guyana, an ardent supporter of Mr Cameron and a CWI board member for the past ten years, announced his challenge for the post of CWI presidency in mid-February. His running mate is the Vice President of the Barbados Cricket Association Mr Calvin Hope, who, like Mr Sanasie, has been endorsed by Guyana and Barbados.

The current Guyana Cricket Board has fended off all attempts to loosen its hold on the reins of power over the past decade, with a serious of Machiavellian manoeuvres, whilst waging most of its battles in the law courts. The latest attempt was the aborting of elections on 26th February, owing to a legal imbroglio, which saw the Cricket Ombudsman citing the question of fairness to the Essequibo board.

While declaring his intention last week to seek re-election, along with his running mate and current CWI vice-president, Dr Kishore Swallow, Mr Skerritt laid down the gauntlet to his challengers. In a war of words, the president described his opponents as “antiquated, self-centred and [possessing] confrontational mindsets”. The president noted that his team was continuously battling “petty boardroom politics and territorial insularity” as it tried to improve the administration of the game within the region.

In their 2018 bid for office, Mr Skerritt and Dr Swallow, who received the endorsement of several past West Indies cricket legends, presented a ten-point ‘Cricket First Plan’ encompassing their vision for the development of the game. During their two years in office, there were two major developments.

Firstly, there was the retention of the accounting and management consulting firm Pannell Kerr Forster (PKF) to conduct a business situation assessment and review of CWI’s financial management systems. PFK’s findings, which were summarized in the 60-page ‘Business Situation Assessment and Financial Review – 2019’ and adopted by CWI at its December 2019 Meeting in St Maarten, were extremely critical of the Cameron administration’s conduct in office and proposed several changes to rectify the desperate situation of the board’s finances. Despite campaign promises of transparency, the Skerritt administration never released the report which was eventually leaked to the media.

Secondly, there was the fulfillment of the campaign promise to review the archaic governance structure of the CWI. A task force of five prominent West Indians duly produced the Wehby Report, a 36-page document, which echoed its predecessors, the Patterson, Wilkin and Barriteau reports, in proposing comprehensive changes to the administration of the game in the region. Amongst the significant proposals was the reduction of the size of the board, and the number of committees, from twelve to five. So far, despite Mr Skerritt’s vow of “no matter how long it takes” he has not been able to get the board’s approval for its application.

To date, the wise words of West Indian sports psychologist Dr Rudi Webster, “Psychological rebirth and the creation of a new growth curve have been elusive. So too have been the revamping of stakeholders’ thoughts, attitudes, values and intent. Urgent structural reform of West Indies cricket is needed but some of the regional boards seem reluctant to accept change,” have fallen on deaf ears. In fact, the President of the Barbados Cricket Association and CWI Director, Mr Conde Riley proclaimed to the media that his governing body had assembled a high-powered committee and threatened to perform urgent surgery on the Wehby Report.

The COVID-19 pandemic has had a dire effect on the Skerritt Administration’s tenure, rendering a realistic evaluation of its performance difficult. However, given the cards the administration were dealt initially, including the precarious financial state of the board when it entered office and the general malaise of the game in the Caribbean, it must be given a passing grade for its attempts at pointing the ship in a new direction.

In seeking re-election under the campaign slogan of Forward ‘WI’ Go, the incumbents have presented an update on their ten-point plan, which includes the increased exposure of the development category of players embracing the Under-23s, Emerging and A-team players, along with the development of the Coolidge Cricket Ground as the centre of a regional high performance system. On the finance side, the plan targets increased support for territorial boards and a deepening of the collaboration with the Caribbean Premier League to achieve “mutually desired cricket and commercial outcomes”.

The Leeward Islands Cricket Board and the Trinidad and Tobago Cricket Board, which sponsored the Skerritt/Swallow slate in 2018, have extended that backing with a second nomination. Mr Skerritt also stated that their ticket had received the “formal advice of support” of the Jamaica Cricket Association and the Windward Islands Cricket Board. As long as there is no change in this arrangement, the incumbents should win the Virtual Test.
Always tell someone how you feel because opportunities are lost in the blink of an eye but regret can last a lifetime.
cricketwindies.com/forum/
Last edit: 18 Mar 2021 12:04 by chairman.